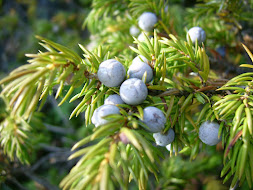 Juniper Berries
This is what gives gin that note of Christmas trees. All gins have to use juniper in order to be called gin. This goes way back to when gin was first invented and they started modifying the recipes from Dutch genever. Legally Juniper has to be the predominant flavor. That rich pine flavor actually comes from the fruit of the evergreen tree. Well, not really a fruit, but a seed or conifer cone. It also has slight notes of lavender and occasionally a touch of heather. Juniper is a very potent flavor and gins that are too juniper-forward tend to be very off-putting to the average drinker so a rounded, balanced gin is much more preferable for most distillers. 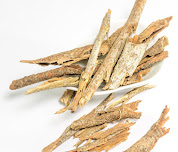 Cassia Bark
Cassia Bark is a close relative to cinnamon. Many people find that cassia has a slightly more delicate flavor though. It again comes from a breed of the evergreen tree this time originating in the south of China. Many gin makers source their cassia from other countries like Indonesia, Thailand. India, and Vietnam. Chinese Cassia does remain the most common. In gin, the freshly dried bark is typically ground to release as much of the flavorful oils as possible. Cassia bark supposedly is also good for blood pressure.

Angelica Root
Angelica root, sometimes known as wild celery, is grown widely in Northeast Europe. It does have its roots in the celery family, no pun intended but has a more woody vanilla smell. It blooms as a many-headed flower and is often harvested in the winter months. Angelica is rarely a dominant flavoring component; it is more being used as a balancing agent to bind the harmonies of various oils together. It does add a slight earthy tone but it more about providing a balance. Angelica is also used as medicine to fight viruses and bacteria.

Orris Root
Orris is really just a part of the Iris flower. This isn't used in the vast majority of gins but it is a fairly common component in more floral gins. Flavor wise it is very similar to violets. Tragically, due to its allergenic nature orris root was banned in many parts of Europe and the US, though this ban is mainly for cosmetics and scents. In gin production, the flower is harvested in late summer and made to dry a couple years before being ground. As with most gin ingredients Orris root has been used in medicine, in this case, it's helpful with sore throats and as an anti-inflammatory.

Coriander
Coriander is the seed of the cilantro plant, also known as Chinese parsley or dhania. The entire cilantro plant is edible, stem seeds and leaves, but the vast majority of gin producers only use the seed. The flavor of the leaves and seeds are similar in a few regards but really have completely different profiles. It's worth mentioning that coriander seeds if consumed in severely high doses, can act as a narcotic. This goes away during gin production though. Coriander is probably the second most botanical in gin actually. Its flavor is a blend of citrus and sage. Its aroma is very akin to rose actually. Coriander in olden times was used to fight flatulence and arthritis.

Grains of Paradise
Grains of paradise are native to West Africa and Ethiopia. This area became known as The Pepper Coast. Grains are actually the seeds of a member of the ginger family. It's also known as Melegueta pepper, alligator pepper or Guinea pepper. These are often used in medicine as stimulants. The flavor is of course quite spicy and peppery, but the aroma is a bit more floral than your standard black pepper. Several centuries ago it was actually more common to use grains of paradise in cooking than pepper. Its use in gin was actually briefly banned in England for tricking people into thinking that the spirit was stronger than it really was.

Cardamom Pods
Cardamom is actually a member of the ginger family. It's native to southern India and is very hard to grow and cultivate aside from very hot climates like Tanzania and Guatemala. It is thus also one of the most expensive spices. 5000 years ago it was used in tooth cleaners and perfumes. Cardamom is widely used in South Asian cuisine, namely curries. There is black cardamom and green cardamom. Black has an almost peaty, smokey flavor while green is more floral, like the eucalyptus. Cardamom is a very warm flavor, slightly sweet, but very pungent.

Citrus Peel
The oils from lemon and orange peels are used very regularly in gin production. Almost everyone knows the flavor of citrus and it's very easy to place a citrus heavy gin. A fun fact is that the aroma molecules of a lemon are the mirror opposite of those of an orange. Citrus oils are great for a number of healing factors. It's good for the skin and also acts as a mild sedative, anti-inflammatory, and diuretic. Citrus was also used to fight scurvy which made it almost a necessity among British naval sailors, who popularized the gin and tonic. Another useful aspect of citrus is that it's helpful as a cleaning agent. That's right, lemon Pledge actually has a reason to be lemon scented. This actually makes a distillers job easier as the tanks don't get as dirty when citric acid is in the gin.

"The intense perfumes of the wild herbs as we trod them underfoot made us feel almost drunk."
- Jacqueline du Pre
Photo Credit: Wikimedia, Pixabay
Posted by bootslof at 8:47 PM