This was this years submission for the Patron Aficionados Tour. I was fortunate enough to be able to participate in last year's exhibition in Atlantic City. This year the event comes to my neighborhood of Philadelphia. Technically this is an exhibition, not a competition but there's a prize at stake so what's the difference? Well, I'll tell you. It's a lot less stressful and thus, a lot more fun. Everyone naturally comes together, especially when you're already good friends. We drink with each other and enjoy the ride. 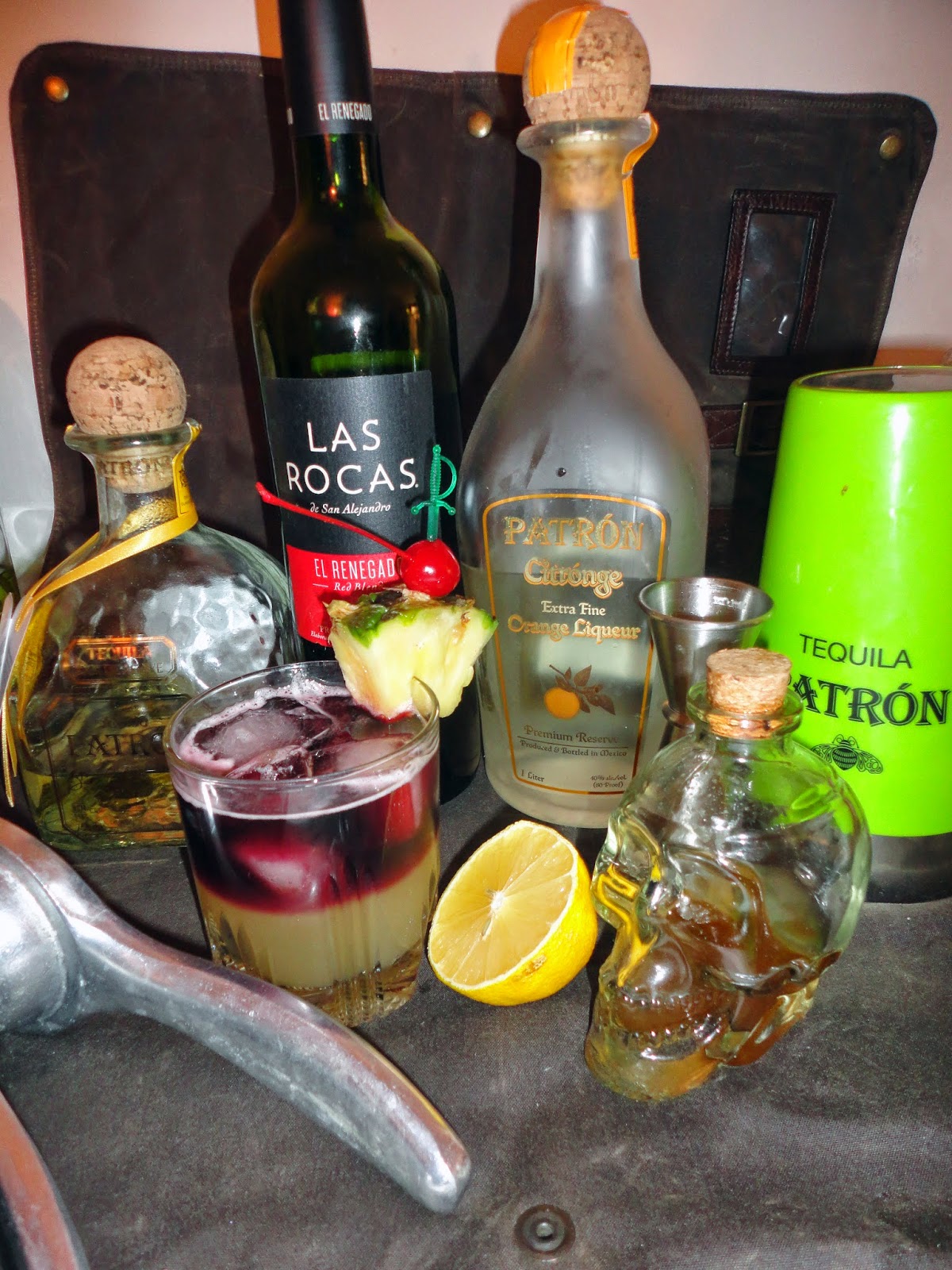 To make the infused nectar, simply pour about a cup of water and agave nectar into a saucepan and add a serrano pepper with as many seeds removed as possible. let simmer until the desired taste and consistency is reached. Add a few berries like strawberries for a fun twist.

Add all the ingredients except the red wine to a mixing tin with ice. Shake vigorously and strain into a rocks glass with ice. Carefully float some red wine on top of the cocktail until the glass is full.

The inspiration for this cocktail came from the New York Sour, which is effectively a whiskey sour with a red wine float. I decided to bring back my spicy agave nectar I used in my cocktail last year, the Old Timey Honky Tonky. I adore the spice and I've been using it constantly in cocktails and cooking.

The name Colima sour is a reference to the fact that it is a sour and to the volcano, Colima. No, not kalima. In addition to being the name of one of the 32 states of Mexico, Colima is one of the most active volcanoes in Mexico and even in North America. It sits partly in the state of Colima, but mainly in the state of Jalisco, where Patron is made. I thought the name fit rather perfectly with my cocktail. Not only is Colima a state like New York, the volcano angle works too. There's a nice hot spice to the drink and the lovely red float on top might suggest the lava angle.

Fingers crossed for this year. Updates to come.
Posted by bootslof at 11:03 PM No comments:

This is going to be a series of posts about how to start sampling different types of spirits if you are a beginner drinker. What's the difference between bourbon, scotch, and Irish whiskey? How is London dry gin different from American or Indian made gin? The best way to figure out what you like is to go out and try things. With so many options out there I thought it would be nice to give newbies a jumping-off point into their world of spirits. I'm trying to find bottles that are available at nearly every liquor store or can. Today, I'm talking about rum.

1. Barbancourt White Rhum.
This is a fun little rum Agricole. This one is Haitian made. It has some funky notes to it. Agricole rums are generally a bit more earthy and grassy. It has a regional price point at about $20 per bottle. There are plenty of light rums out there, but they really don't feel very earthy. They feel very mechanically made. Agricole rums are made from freshly pressed sugarcane rather than molasses, which is a bit more caramel-like in flavor. This is what a fresh rum will taste like. There is certainly still a sweet side to it, but it is matched by these other earthy flavors. Aged rums will have a whole different character.

2. Appleton Estate V/X.
Jamaican made, Appleton possesses a rich, aromatic body. Appleton has been in business since 1749, 265 years. It is the second oldest rum producer in the world. This is actually a blend of 15 different rums, aged at least 5 years in old Jack Daniels Barrels. When you blend 15 different rums you're bound to find something you'll like about it. It has some light fruity notes. There is a bit of alcohol burn, but nowhere near the worst, you will taste with rum. This is quite a well-rounded introduction into the world of rum. Figure out what aspects you like in this rum and then try some more rums that have a bit more of a focus on those aspects.

3. Captain Morgan Private Stock.
I was seriously torn about putting a spiced rum on the list, but this is one of few rums I could actually sip straight without the need for a cocktail. This is actually a sipping rum. I did decide that regular Captain Morgan wasn't really worth a detailed explanation. The company has hardly been around for 70 years, but they command an amazing amount of the market. Regular Captain Morgan is aged up to a year. Private Stock is aged at least two years. The most distinctive bit I note about the private stock is the smooth ridiculously vanilla-flavored finish.
4. Gosling's Black Seal.
This is a really dark rich rum. It comes from Bermuda. Gosling's is blended and aged three years in old bourbon barrels. It tastes like burnt sugar and caramel, notes of vanilla, a lot like bourbons. But Black Seal is much sweeter; some notes of butterscotch shine through. Gosling's also makes several other products, namely there non-alcoholic ginger beer. A dark and stormy is actually the only copyrighted drink recipe name. Gosling's Black Seal and Gosling's Ginger Beer with lime over ice make up a protected entity. No other recipe can use that name.

This is going to be a series of posts about how to start sampling different types of spirits if you are a beginner drinker. With so many options out there I thought it would be nice to give newbies a jumping-off point into their world of spirits. I'm trying to find bottles that are available at nearly every liquor store or can be acquired fairly easily. Today, I'm talking about brandy.

You're probably familiar with the idea of brandy, maybe even tasted a bit in your eggnog at Christmas. You know the notion of an old man enjoying a snifter of brown liquid in his robe by the fire. It looks good, doesn't it? What's he got that you can't have? Nothing. Well, maybe where you live you can't have a real fireplace. But the relaxing with a brandy idea, that's a good feeling. But how do you know what you'll like? Start trying things.
1. E&J Brandy XO.
This is a pretty staple domestic brandy. E&J is one of the bigger brandies available in the United States. They have a decent line featuring a basic brandy, as well as a VSOP and the XO. All of which are very reasonably priced. See if you like the smoothness and sweetness of this product. You'll find a lot of variability in the fruit flavors of brandy, as well as the alcohol burn.

2. Martell Cordon Bleu.
Martell is actually the oldest brand of cognac on the market today. Cognac naturally being french made, Martell was the first of the major cognac houses, the others being: Hennessy, Remy Martin, and Courvoisier. In fairness, there are also Camus, Hine, and Frapin, but they haven't reached global popularity yet. Martell Cordon Bleu has been around for over a century now. It is a fantastic brandy for sipping neat. Try adding a splash of water like you would with whiskey to open up the aroma and oils.
3. Laird's Applejack.
This is actually an apple brandy from the oldest licensed distillery in America. Some people do think of this as more of an apple whiskey, but semantically this is closer to a brandy, in that is uses fruit, not grain. There are more premium lines of this product if you are interested in tracking them down, including their bottled-in-bond and their white "Jersey Lightning" This is a staple ingredient in a number of cocktails including the Jack Rose. Some bars will use calvados instead of Applejack however

4. Alexander Grappa di Cabernet.
Grappas are traditionally Italian made. They are very similar to a number of other grape-based brandies from around the globe. As with many brandy style liquors, grappa is usually made with the remnants of the grapes after they're used for winemaking, or pomace. Brandy itself is commonly fermented from just the grape juice, rather than the entire grape. Many grappas, including this one, choose to name themselves in a similar fashion to the wine made. When you smell this you can really understand the grape flavors in the spirit

"Claret is the liquor for boys; port for men; but he who aspires to be a hero must drink brandy."

-Samuel Johnson
Photo Credit: Needpix, pikist
Posted by bootslof at 12:36 AM No comments:

Flavored vodkas have been hitting the market in a big way. Some brands like Pinnacle have dozens upon dozens of flavors available. They range from orange to rainbow sherbet. A brand I hold a soft spot for is Oddka, with flavors like electricity, wasabi, and salted caramel popcorn. Veteran bartenders have known how to infuse spirits with flavor for centuries. But saving time has always appealed to the nightlife industry and home bartenders alike. There have been a few fun cocktails that utilize flavored vodka. If you don't want to go and buy a bottle of flavored vodka it is quite easy to make your own with most flavors. Though I'm not sure I care to know how they make vodka taste like a peanut butter and jelly sandwich.

Pour yourself a shot of chilled citrus vodka. Wet the back of your hand and pour some sugar onto it.
Lick the sugar, take the shot, and suck the lemon. This takes a lot, if not all, elements of a popular style of taking tequila shots. It's named after the common sucker candy. This drink can also be made as a martini. Try it with a sugar rim and garnish with some nice juicy lemon. If you'd prefer to use a premium vodka you can do your own infusions or just mix in some lemon juice and simple syrup. Oh, and if you're a fan, just try some limoncello. Limoncello is just a homemade (though you can buy it in stores) vodka based lemon liqueur. 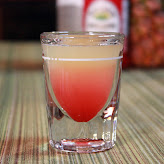 1 3/4oz Vanilla Vodka, 1/2oz Pineapple Juice, 1/4oz Grenadine
In a mixing glass add all the ingredients except grenadine. Swirl or shake and strain into a shooter glass. Drizzle a little grenadine into the glass. It should settle and create a nice gradient.
This is something of a more interesting shot.  Instead of being just one solid color like so many drinks, this gives itself a little gradient for a fun splash of vibrancy. This can also be made as a martini. Garnish with a cherry or some small pineapple rings. You can even make it as a jello shot, just add a cherry at the bottom of the cup before pouring the shots.

I've seen this drink by many names and many slightly tuned recipes: Wedding Cake Martini, Birthday Cake Martini, Cake Mix Martini, etc. Try using all kinds of ingredients and flavors. I personally love a nice creamy drink after a balanced meal. Cake is a dessert, be it solid or liquid. Many people find cake mix gives an odd thick consistency. Try it with some strawberries and a little amaretto to make a Strawberry Shortcake Martini.

Add the ingredients to a cocktail shaker with ice. Shake and strain. Garnish with a rose petal.
Credit where credit is due, this recipe is from Grey Goose. Their L'Orange vodka is a very fine premium flavored vodka. This is a very simple cocktail, all things considered, and it will bring elements most guests aren't overly familiar with. St. Germain is an elderflower liqueur, with a sweet botanical flavor. Some pomegranate and lemon juice round it off quite nicely. Some advanced drinkers might find this type of drink a bit rudimentary, just stacking different citruses with a little flowery note but it is a great way to look extra classy without too much work.