This was an interesting thought experiment I posed to myself. What would my ideal meal be if money, materials, and time were no object? My birthday is coming soon at the time of writing this post and I was wondering what I'd like to do for it. A nice hearty dinner has always been tradition, but if I could have anything, from any restaurant, for any number of courses, along with any drink pairings, what would I want? To be clear, these are all items I've enjoyed individually in the past, though not necessarily together. While these are not all my favorite foods specifically, they are foods that hold some significance or nostalgia to me. I hope you enjoy. What would you do for your greatest meal ever

Drink 1: Americano
This is my staple before meal drink. It's light. It opens my palate. It won't compete with other flavors and it's one where I can sip it at any speed I like and on a hot day it is truly refreshing. This drink was the first drink ever ordered by James Bond in Ian Flemming's novel, Casino Royale. I adore Campari so I knew I'd need that in my first drink as it is an aperitif. For the vermouth, I would prefer Vya, a new, Californian made, line of Vermouth. I might take it with regular soda, but I would prefer it with Perrier. It is worth mentioning that during the entire meal I would like a side of ice water.

To follow up with the last bits of my cocktail, I would like to consume an array of cured meats and fine cheeses. I know I would require some prosciutto, ideally thin sliced prosciutto de parma. Some of the meats must be a bit spiced, some properly made pepperoni, salami, or bologna. One of the greatest slices I've eaten recently was actually of duck prosciutto so I'd like a few slices of that, but not too many as it's quite rich. I'd like a bit of Roquefort, sheep's blue cheese, but again not too much. For contrast, I believe that some smoked brie or Pierre Robert would be in order. We may as well throw in some goat's milk cheese as well, some bucheron perhaps. naturally there would be a few other compliments such as candied walnuts and spicy stone mustard, along with bread, oil, and jam.

Drink 2 and 3: Sazerac & Fruh Kolsch
As I move from lighter flavors of cheese to some stronger flavors I opted for my ultimate favorite cocktail and a good all day drinking beer. Yes, a bit of double fisting here, but I would be sitting and having water as well. The Sazerac is really a favorite cocktail if I know I have a competent bartender tending to me. It's supposedly the first cocktail truly invented in the United States though there is much dispute over this. The original recipe supposedly called for cognac, and then started being cut with rye, until eventually it just became a rye whiskey cocktail, which is how I like it. I like Dad's Hat Rye with Grande Absente for the rinse.

Fruh holds a special place in my heart as the first drink I ever had technically legally. Sorry Herr Goetz but I had a few beers when I was on the school exchange in Germany. It was in violation of the school regulations, but it was worth it. A group of us students went out with the German students to the Rhein Park and we drank. We got a case of Fruh and of something else, Spaten or Becks. I'd had plenty of beer before, even wine, and a few liquors. But there was something about that beer that made me feel good. This was the first where I really felt like that there was nothing wrong with it. We didn't have to hide it from anybody. I looked for this beer everywhere when I came to be of age in the United States to no success. It is in no way the best beer I've ever had, but it's a simple true pleasure. One particularly bad day I found myself at a bar and they had Fruh on draft. As I was drinking that beer all the awful things that were happening fell away.

Entree: Surf and Turf with Potatoes and Mac 'n' Cheese

You can never go wrong with two premium pieces of meat. Steak is one of those things that pairs well with the heartier cheeses and my new refreshments. One of my favorite meals at my old job was a 9 ounce steak cooking in it's own bloody juices topped with a disk of melted soft cheese, I forget which one at this time, and a few potato medallions cooked in what I recall being duck fat. Like Uma Thurman in Pulp Fiction, I typically take my steak bloody as hell. To pay homage to the song of a dear friend, I think I'd have a porterhouse. Though I'd take it pan roasted to medium rare with butter and light seasoning. A really wet steak would not be best paired with my other dishes and sides.

I have a long-standing love of lobster. I remember being a boy and cooking live lobsters with my parents. My cat would fight them and my father would try to recreate the scene from Naked Gun 2 1/2. I remember visiting Cape Cod in the summers as a child and eventually coming to love ripping apart and eating the messy treat. A bit of melted butter to pair with a split lobster tail and two big fat cracked claws is all I could ask for were it to be paired with a steak as well. I imagine a 2-pound lobster would suffice for this.

I debated a long time what side or sides I would want with this main course. Potatoes were what came so naturally it was almost a cliche. Baked potatoes were never my style. Roast potatoes in duck fat would easily be my ideal, but I alway like mashed potatoes too. So I decided to have both. A half dozen or so baby potatoes split and fried to give them a nice crisp snap. Naturally, a little salt and pepper, possibly rosemary.

The mashed potatoes would require some mix ins. A bit of garlic and cheddar cheese should suffice, but butter, cream and other light flavors would be welcome. A nice creamy feeling to wash the palate. I don't care for them overly lumpy or fluffy. a nice creamy texture is what makes it my comfort food. I thought of incorporating bacon to the potatoes, but I thought that better suited to some pasta, or better yet, some Mac 'n' Cheese.

I firmly believe that the best macaroni and cheese is baked with bread crumbs on top, so that is a much. Bacon pieces should be incorporated, not bacon bits, pan cooked bacon sliced to about 3/4". Also, nice long noodles please, while elbows and shells promote nostalgic thoughts of Mom making Kraft or Velveeta, I believe, in this case, comfort food serves the function of providing the comfort. Oddly enough the cheese sauce blend isn't a real concern for me in this dish though I would like it not to be over watery, and preferably to have a little spice to it, a little warmth.

Drink 4: Patron Burdeos
I thought a very long time about what my after dinner drink should be. Ideally my previous two would hold through my main course spread. I thought of whiskey, port, amaro, or even a boozy milkshake kind of drink. While whiskey was my style, I thought it better suited to leave that to pair with the steak and not to be with dessert. Then I thought of brandy. No, that wouldn't be for me. While I like it, I knew there was something better. Then it hit me, the most wonderful drink I was privileged enough to taste as a gift when I did my first cocktail showcase. Patron Burdeos had the taste of fruit and wine from it's wonderful aging in the Bordeaux wine barrels. When you mix that with the proof of a good tequila you get a drink a say is better than cognac at being brandy. A snifter of this neat would be fitting for a last drink. 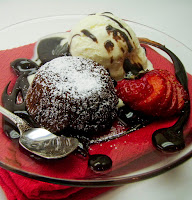 Dessert: Lava Cake, Ice Cream, Berries
I needed some chocolate for dessert, but also a little more creaminess other than just cheese and butter. Lava cake is a great go-to dessert because it's never bad, but when it's good, it's tremendous. If the cake has a good crunch to the shell that almost cracks allowing the hot lava to flow out, then you have yourself an amazing cake. You naturally need some cold to go with that. So some vanilla ice cream, you can't beat a cliche sometimes. A few chilled strawberries, and maybe a few raspberries

I thought of doing a whole spread of every kind of food imaginable, but I knew much of it wouldn't pair together. So I opted for the most luxurious cohesive spread I could. A meal that would remain uncluttered was a necessity. I wouldn't want a volcano sushi roll with some barbeque pulled pork and creme brulee. It just would mesh right on any level, though all of those things are amazing on their own.

I thought I'd price this were I to order it at a restaurant assuming average markup and prices. I'd actually estimate this at a little over $200, maybe $240. A good chunk of that comes from just the Burdeos. Were I to make this on my own, excluding cooking costs, it may only cost about $65 if I shopped the deals available to me. Of course, that is by the ounce for cocktails and may be considerably higher than that if you factor in the cost of whole bottles and containers. But I think this meal would be worth that. In practicality, I might switch the Burdeos for something more practical, but this thought experiment was for the ideal meal.