This was an interesting little cocktail I created. Technically it's the first cocktail I've ever made that actually won a competition. At a guild luncheon that was hosted by Ruffino Prosecco, they decided to pit us in something of an Iron Bartender Competition. They divided us guild members up into 5 teams and told us to make 2 cocktails per team, one on the rocks, and the other served up. We were given free reign of the bar at Stratus Lounge. Many teams tried to come up with a game plan, but our team took a totally different approach, a more playful one. We all just hopped behind the bar and started making drinks. I started with a sort of orange French 75. It was a good drink but a bit boring. My friend Dan was working on a sort of strawberry smash. As the five of us were playing around we would taste each other's drinks and give feedback. In the end, Dan turned his into our up cocktail and I switched mine to a collins style drink with a little chartreuse zing. 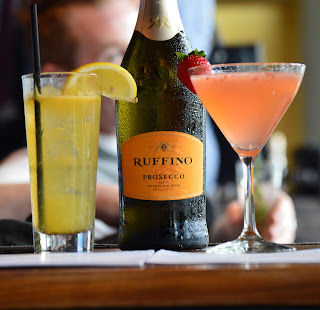 Peel an orange and tear away about half the slices. Add the slices and all the ingredients except the prosecco to a mixing tin with ice. Shake very vigorously to break up the orange. Strain into a collins glass filled with ice. Top with prosecco and garnish with a lemon wedge.

This cocktail took quite a bit of ingenuity. Toward the end of the time limit, all the tools seemed to disappear. I had been fresh squeezing juice from halves of oranges for all of my experiments but when the clock was ticking I couldn't find a juicer, or a knife for that matter. I just said, "I'm doing this like in grade school." I used my thumbnail and peeled off the skin, tore off half the orange and chucked it into a tin. The ice they had at Stratus was good and dense so I knew it would do the job pulverizing and juicing the orange. I originally planned to double strain this to make for a clean presentation, but they were counting down the seconds as I wrapped up and a mesh strainer was nowhere to be found. I wound up just using a Hawthorne strainer which filtered the big chunks of pulp but left a few bits. This actually made the drink a lot more fun. I made it again later by double straining and I don't think it was as good. The pulp added a feel of scratch made lemonade and I think made the drink feel lower proof and more drinkable. The pulp floating around the drink in the bubbles is actually partly what inspired the name of this drink. Though the name takes an indirect reference to a Ron White bit.

Photos by Bry Guy of dumbartender
Posted by bootslof at 11:08 PM