This is the oldest style of wine bottle opener around. The style of it makes it look like it was some type of woodworking equipment. In short, you press the point in, screw the handle until it is deep enough. Grip the handle firmly and yank the cork out. The original design is of course very risky to use as it requires a very firm grip on the neck and shoulder of the bottle to be able to physically yank the cork out. These are the kind of screw you find Many times when an amateur tries to use this type of corkscrew they will drop the bottle and make all kinds of mess, especially if it's a bottle of white wine that's been chilled and has condensation on it. Some modifications were made over the years. Springs and levers and more form fitting grips have helped, but they still tended to rely on physical strength to yank the cork out

Waiter's Wine Key
Give me a lever and a fulcrum and I can move the earth. Just about anyone who has worked in the service industry has used one of these at some point. They start as a sort of swiss army knife of handy bits. There's a blade for removing the foil around the cork. There is, of course, the metal helix on a hinge which screws in. What gives this little tool the nickname Waiter's Friend is not just the portability of the tool, it's that little extra piece of hinged metal which just makes the job so much easier. Once the metal helix is screwed in, you tilt the handle and bend down that metal plate so it presses against the top of the rim of the bottle. Carefully holding all parts in place, raise the open side of the handle levering out the cork. It takes so little effort compared to trying to pull it straight out.  It does take a little getting used to. You need to figure out just how deep to screw it in so that when you pull, the entire cork comes out. Some newer keys have a two-tiered metal plate. This allows the key to pull the cork part way out, and then finish the job with the whole length of the plate.

These are the most common wine openers I find in your average home. This is a very novel modification to the standard cork pull. they simply took the standard cork screw that had a brace on it and added some levers attached to gears so that it pries itself out rather than having to be yanked out. It maximizes efficiency and cuts the amount of force needed in half. simply position the screw at the top of the cork and twist the knob. If you have a firm grip on the base of the corkscrew and the bottle then it should screw in with very little resistance. As you screw the winged levers will raise. When you reach a sufficient depth firmly grasp the levers and press down. the cork will be forced out without much strain. Often times the twisting knob serves a second function of a beer bottle opener.

Rabbit Opener
This is a sexy piece of bar equipment. The advantage to this model is that it twists itself into the cork as you raise the handle. So all you have to do is grip the two ears, lift the lever up, and then pull it back down. When these work they seem like the smoothest bottle opener I've ever worked with. But these are far more form over function I find. They are sexy and can impress your house guests, but sometimes they just don't work. The worm will slide in but then slide ride out without pulling the cork with it. I find the expense and bulk of this item to be impractical for a bartender though they do look pretty at home 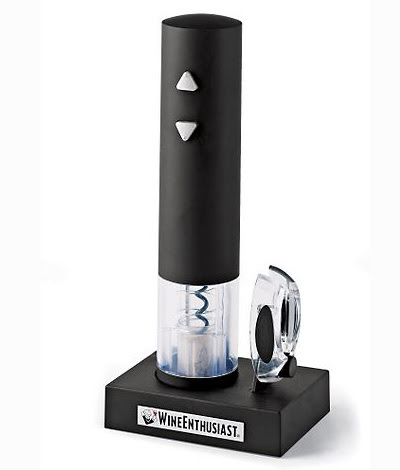 I'm seeing more and more of these on the market today. Yet I don't see enough of them used in bars or even households. I think there's always been a certain charm to seeing a bottle opened by hand. While as an employee I like expediency in my work, as a guest I like the little ritual. They operate very much on the same system of the rabbit opener but use a battery to spin and pull the worm helix. Oddly enough, these tend to be cheaper than the rabbit openers. Yet, there's no lifting, twisting or squeezing necessary. I find these work very well for home use. The average battery would not be sustainable for a busy wine bar environment, only being able to open five bottles a day. I like these though, most brands work well and look very sexy sitting on the counter with the other appliances.

"Wine is bottled poetry."
- Robert Louis Stevenson
Posted by bootslof at 10:06 AM