The Boston Shaker
Supposedly the first concept of a shaker goes back to well before the common era to Central and South America where it was used to incorporate chocolate into a beverage. The Egyptians also used it to incorporate spices. The shaker as we know it today goes back to the late 1800s where an innkeeper noticed that two of his serving vessels nested together. In 1872, a device was actually patented to shake six drinks at once.

In America and many other countries, when you shake a drink, it's going to be in a Boston shaker. Especially in a high volume bar environment. The two pieces of a Boston shaker are very multi-purpose. Mixing glasses can be used as beer glasses or even collins glasses. Take a mixing tin, and insert it with the open end down over the mixing glass and give it a light smack to make a seal. Most bartenders find it easier to create a seal with the tin cocked to the side to create a flush seal between the glass and tin. This makes it easier to separate the two once shaken. Shake vigorously, horizontally, rather than up and down, for 8-10 seconds. to break the seal that has most likely tightened due to the ice shrinking the metal strike the side of the tin, at the rim, 90 degrees from where the two parts are flush. This should break the seal and allow the removal of the glass.
Variants of the glass on tin combination are very common. Many craft bartenders have opted to use smaller, 16 oz., cheater tins to make the seal rather than a mixing glass. this allows for a seal that can be gripped and maintained with one hand while shaking. This allows for the shaking of two drinks at once which is very handy at craft cocktail bars as they have become famous date venues. No one wants to stare at their drink waiting for their partner to get theirs, so two drinks at once allow for a proper toast. The French shaker may deserve its own category, but I regard it as a simple variant to the standard Boston shaker. The smaller tin is specially designed to create a perfect seal with the mixing tin and bows in to create a firm grip for the bartender. This also has the advantage of not having any glass that could break. 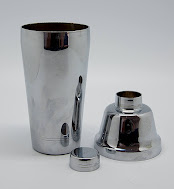 The Cobbler / Three Piece Shaker
The cobbler shaker has a similar design but with an added dedicated middle piece in the design. It dates back to 1884 as a modification to the Boston shaker which included a built-in strainer. One simply builds the drink in the bottom tin, adds the middle strainer piece to the top of the tin, and then adds the cap on top to create a full seal. Some people say that this incorporates less air into the drink and that when liquid gets trapped between the top two pieces it creates a less emulsified drink. I do find myself just naturally shaking these drinks longer to make sure it's well chilled. Personally, I really don't enjoy this style of the shaker as they often can become stuck together and impossible to separate. With a bit of training, I'm told this won't occur but I really don't see it as a time saver in the long run. There is still a separate strainer piece you need to clean and the pieces are far less versatile. These styles of strainers can look very impressive and ornate, but they really don't serve many functions, all things considered.

"You can't buy happiness, but you can prepare a cocktail, and that's kind of the same thing."
Photo Credit: Wikimedia, Project Noun
Posted by bootslof at 4:38 PM