I'm going to open with a quote this time: "To be honest, after years of smoking & drinking, you do sometimes look at yourself & think... in between the first cigarette with coffee in the morning to that 400th glass of corner-shop piss at 3am, you do sometimes look at yourself & think: 'This is fantastic, I'm in heaven.'" A truly wonderful quote by Dylan Moran in Black Books. Guilty pleasures are what makes us so interesting. Hedonism, consciously unconscious self-destruction, cognitive dissonance, a glorious blend of yummy yummy and boo hoo, that's what smoking is. That's what drinking is. And it's so much better when they're combined together. Why is it that the things that feel best in the world always have those little strings attached.

Drinking and smoking have been entwined into our culture for a long time. From the upper-class ladies sipping a martini and smoking a long cigarette, to a tired politician smoking a cigar with a glass of whiskey or brandy. I'm sure a Budweiser can has been used as an ashtray many a time. It occurred almost simultaneously that we discovered that smoking was bad for us and that alcoholism was declared a disease, despite their massively extensive history. What is it about a slow release of poison into our system that is so fantastic?
Tobacco and drink have gone together a long time, so much so that many cigars are ever aged on old liquor barrels. I'm smoked a number of whiskey, rum, and brandy cigars, where the tobacco leaves are aged in the old wood. They take on the smell and some of the flavors on the spirit.

Tobacco liqueur does exist as well. It's a fairly new product. It takes fresh tobacco from Louisiana along the Missippi. It carries a great oily nature from the fresh tobacco leaves. Dried smoking tobacco has a much different nature than fresh of course. It was actually featured on Travel Channels Booze Traveler. 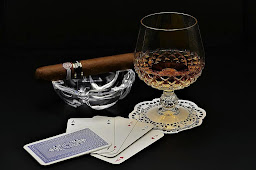 The cigar bar is an ancient institution. While they really only became truly popular as cigar bars in the nineties after the smoking bans. Before the bans, everyone smoked in bars. Some bars might've had no-smoking areas but it was just how it was done, going back to gentleman's clubs and hunting lodges and the like. Hookah bars have also started popping up in cities and small towns across the country. They take a good deal of their theme from Middle Eastern and Asian bars and cafes, though some are blending more into the gentleman's club vibe. Human beings seem to need an activity to occupy them while having meaningful conversations. They smoke, have a drink, or play a game of chess. Smoking and drinking in theory are individual actions but they bring about a great sense of community. I got one of my first jobs by having a conversation with a manager over a cigarette while he was on break. These days especially, smoking has become a community.

Aside from the glorious smokey flavor that ties tobacco with so many spirits and the great sense of community granted by both indulgences I really don't know what makes them so great together. But they are.

"I know a man who gave up smoking, drinking, sex, and rich food. He was healthy right up to the day he killed himself."
- Johnny Carson
Photo Credit: Needpix, pikist
Posted by bootslof at 10:53 AM