The Sonic Screwdriver is an icon for fans of Doctor Who. It is the tool that works on everything, except wood. We all know the classic screwdriver. It's a simple highball of vodka and orange juice. Naturally, the adult nerdy community likes to have a drink when they watch their favorite show. Many people have created their own recipes based on their tastes and whose Sonic Screwdriver they prefer. Matt Smith's screwdriver would glow bright green while David Tennant's was blue. The War Doctor had his red Screwdriver and River Song had her special red setting. There are dozens if not hundreds of screwdriver variations out there. I've picked out a few favorites and thought I'd go through and give them a few reviews. 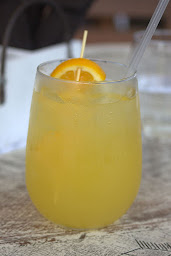 BBCA's Sonic Screwdriver Punch
3 cups orange juice, 3 pureed ripe peaches, 4-5 cups lemonade
Chill the juice, peach puree, and lemonade for at least 1-2 hrs before serving. Mix the juice and puree and pour over ice. Top with the lemonade. Garnish with a few mint leaves.
This is an interesting little cocktail put out by BBC America. It's a non-alcoholic punch so it's good for kids to enjoy as well. For adults, it is an enjoyable drink but certainly not the most creative non-alcoholic punch I've ever seen. On the bright side, you can jazz it up with just about any fruit or berry flavored vodka. This is odd that it took the moniker of a sonic screwdriver though. BBCA can do whatever it likes, of course, but aside from having the orange juice this is nothing like a screwdriver or a sonic screwdriver. It lacks the color. I give it a 5/10. Try this with a mixed berry vodka and a sparkling lemonade. That could bring it up to a 7.

Nerds and Nomsense's Sonic Screwdriver
1 oz Blue Curacao, 2 oz Blood Orange Vodka, 3 oz OJ, splash Red Bull.
Shake the ingredients aside from the Red Bull with ice and strain into a martini or cocktail glass. Top with red bull. This makes two cocktails
According to the creator, this drink is meant to taste like gummi frogs. Fans of Doctor Who may remember gummi candies have played some significance, namely the jelly baby. They were featured with the Second Doctor and they've continued to be referenced all the way to the current, Twelfth Doctor. Even the Master offers a few to his wife as he was taking over the world. This drink is actually quite unique in that it doesn't take its style from the original screwdriver though it does use vodka and OJ. I regard this as a very good reference to nerdy culture and it pays homage to the fandom but as a cocktail I give it a 6/10. It's not the most original cocktail, the proportions and balance don't work for me as a proper sour or highball. The flavor is a mishmash of sweet, I don't see myself ever having more than one of these in an evening.

Build on ice in a highball glass
The recipe keeps to the premise of the traditional screwdriver but uses Vanilla Vodka for sweetness, Blue Curacao for orange flavor, and sprite to help with citrus. I actually greatly respect this recipe. It keeps the vodka and orange citrus flavors while getting it just the right color and adding a unique vanilla flavor in combination with bubbles. It's a great re-imagining of the classic. I actually first had this with Pinnacle Whipped in place of vanilla vodka. My verdict for this drink is an 8/10. It is very tasty, original while holding to tradition, and very easy to make for the lay person. This is probably my top pick for a long DW marathon. Allons-y! 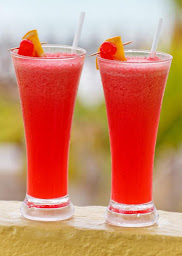 The Way Station's Sonic Screwdrivers
Absolut Citron, Orange Juice, with a different topper depending on the doctor

Pour vodka and OJ in a glass with ice. Top with Blue Curacao for a 10th Doctor, Midori for the 11th, and Grenadine for River's Red Setting
The Way Station is an oasis of a bar for nerds everywhere. Unfortunately, I was unable to discern their exact recipe or ration for these cocktails but as they tightly resemble the standard highball I recommend a ratio of 1 part Vodka to 2 parts Orange juice with about a half part of the topper. I do take some issue with the drinks though. The colors don't match up that well when mixed. The orange juice is just too strong a color. They taste very sweet, definitely a girly drink. They are fine drinks, but I regard them as a bit simple for a cocktail bar in New York City. That said, they're very good for home use. My verdict, 6/10, sweet and simple, in other words, uninspired, a good cocktail that anyone can make, but there's a lot more room for improvement.

I have been made aware that The Way Station has since added a 9th and 12th doctor to their list of screwdrivers. The 9th uses Pimm's as a topper to the template above. The 12th actually impressed me. it's Dewars, Amaretto, bitters, and ginger ale. I actually like this balance for Peter Capaldi's Doctor. Scotch fits well and I love that they broke the template and completely redid the personality of the drink.

Finding a Doctor Who quote about alcohol was actually pretty interesting as the early doctors swore that they didn't touch the stuff. Chris Eccleston changed that though.

"I'm telling you. Lloyd George, he used to drink me under the table. Who's the Prime Minister now?"
"How should I know? I missed a year."
Photo Credit: Wikimedia, pxfuel, Snappy Goat