Now that we have a foundation of what whiskey is, how it's made, and how to appreciate it, it's time to use it. Whiskey is a key tool in any bartender's arsenal. These drinks are designed to showcase the whiskey so don't skimp too much. Bourbon is the staple for each of these, but you can use almost any North American whiskey for these. 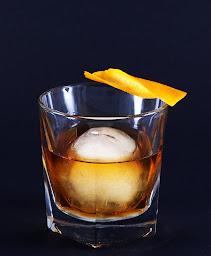 Soak the sugar cube in bitters. Place the cube in a rocks glass and muddle it with a little water or club soda. Add ice to the glass and then add some whiskey, typically bourbon. Stir lightly and garnish it all with an orange peel.
Where better to start drinking cocktails than with a classic that remains great to this day? Also known as the old fashioned whiskey cocktail. This drink dates back a very long time. Most likely, the origins of this drink go back to the 1700's. All a cocktail was historically was a spirit with sugar and bitters. The old fashioned holds true to this and just throws a little garnish in there. The garnish of an old fashioned is very up to debate. An orange slice, orange peel, lemon peel, a cherry, or a combination thereof are all commonly used.
Manhattan:
2 oz. Whiskey, 1 oz. Sweet Vermouth, 2 Dashes Bitters, Cherry

In a mixing glass add all the ingredients. Add ice and stir the drink until it is well chilled. Strain the drink into a chilled cocktail glass and garnish with a cherry.
The Manhattan is a more modern retelling of what the old fashioned was. Instead of using regular sugar, however, one uses sweet vermouth. The origins are a bit shady and there are many myths behind it, many of them were disproved. This was invented in the late 1800's or the early 1900's. Thus, the original recipe is a bit hazy as well. These days craft bartenders make their Manhattans with a ratio of 2:1:2. Possibly coincidentally, 212 is the area code of Manhattan, New York.
Mint Julep:
2 ½ oz. Bourbon, 1 oz. Simple Syrup, 2-4 Mint Sprigs

Lightly muddle 5 or 6 mint leaves with the simple syrup in a julep cup. Add about an ounce of bourbon to the cup and then fill with crushed ice. lightly stir the drink and add the remaining bourbon and a bit more ice for presentation. Stir again and garnish with a sprig of mint.
The Mint Julep is actually the Mint Sling. First recorded in 1793, the original recipe did call for cognac rather than bourbon. This is one of the staple drinks of the Kentucky Derby. The immense cold of this drink and the nice sweet notes of the sugar, as well as the oils of the mint, create an amazing refreshing beverage for a hot day that doesn't skimp on the whiskey. 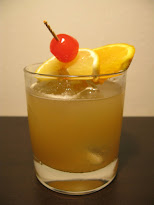 Shake all the ingredients with ice in a shaker and strain either into a rocks glass with ice or a sours glass. Garnish with an orange slice and a cherry
The whiskey sour came about between 1850 and 1860. This is a playground for bartenders. Try it with a little orange juice for a Stone Sour. Float some red wine on top for a New York Sour. Change the glass and add a little soda on top and you get a John Collins. Different places will change the ratio of whiskey to sour mix.

Special mention to: the Highball, John Collins, Jack and Coke, and Sazerac


"Give an Irishman lager for a month and he's a dead man. An Irishman's stomach is lined with copper, and the beer corrodes it. But whiskey polishes the copper and is the saving of him."
-Mark Twain
Photo Credit: Wikimedia
Posted by bootslof at 10:56 PM