This is going to be a series of posts about how to start sampling different types of spirits if you are a beginner drinker. What's the difference between bourbon, scotch, and Irish whiskey. How is London dry gin different from American or Indian made gin? The best way to figure out what you like is to go out and try things. With so many options out there I thought it would be nice to give newbies a jumping-off point into their world of spirits. These will be fairly medium-priced spirits. I mean these lists to be accessible so probably nothing more than about $30 a bottle, that said, there's no reason for anyone to buy a $6 handle of Vlad vodka and drink it straight. First, I'm talking whiskey. 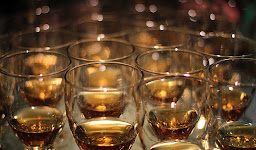 I think the ideal beginner's flight of whiskey should be one from around the globe. These are the staple whiskeys and they will give a well-rounded view as to the style of each region. When trying a whiskey sample it neat then try it again with a few drops of water added to it. This opens up the aroma and releases some of the oils that may have been hiding.
1. Makers Mark Bourbon.
I describe this as a staple bourbon. They spell it "whisky" instead of "whiskey" because they feel it is of a caliber high enough to compete with any old world whisky. Made with corn is has a smooth sweetness to it. The bite is there, but it won't kill any rookie. This is great to sip or in any whiskey prominent cocktails, like Manhattans and Old Fashioneds.


2. Jameson Irish Whiskey.
This Irish whiskey is known around the world. Jameson is always the starting drink of a night of binge drinking. Irish whiskey is commonly seen as the lightest style of whiskey because it really doesn't use any smoke in its process. College students regularly drink half a bottle of this or more by themselves in one night. Just remember, just because it flows down your throat like water does not mean that your body can handle it like water.
3. The Famous Grouse Scotch.
Famous grouse is the highest-selling scotch of Scotland for the last 30+ years. It is a blend rather than a single malt, but it does an excellent job of conveying quality and authenticity. The whiskeys used in the blend come from Highland Park and Macallan, two very fine scotch brands. (Hi Jason, thanks again for all the tastings)
4. Bulleit Rye.
Yes, another American company pops onto the list. I thought of doing a Canadian whiskey, but they tend to work in rye these days. Bulleit is 95% rye in the mash. Rye whiskeys are often seen to have a spicy flavor to them. not really a jalapeno spice, more of baking spice.

special mention to: Booker's bourbon, Jack Daniels, Crown Royal, Southern Comfort, and any and all moonshine