A Robot Behind the Bar

For a while now I've heard people saying that bartenders are getting too pretentious or that they just pour booze into a cup. For some bartenders that might be true. Working at the service bar some of us do turn into robots. A ticket comes in, it is made and sent out to a table. There is no real customer interaction and that is really what makes a world-class bartender. Though not all people want a conversation or a show with their drink. In this day of instant and Keurig coffee, why not apply the same appeal to alcohol.

The first actual robot bartender I heard about was the Cocktails for you. This was a fairly simple robot featured on the BBC show Gadget Man in 2012 with Stephen Fry. Jeremy Clarkson commented that the spinning bottles and glowing blue lights made it seem very gadgety. Originally costing about $7,500, holding ten bottles, with a touch screen display, it was quite impressive for its time.
The Monsieur gained a tremendous amount of publicity on Kickstarter and raised over $40,000 beyond its original $100,000 goal. You can check it out here or at their original Kickstarter page here. Costing around $4000 per unit, they say it is ideal for businesses, nightclubs, and of course home use. As a bartender/mixologist myself, I personally took issue with a few points. The main one being that in my opinion, it is not versatile enough. It only holds eight bottles of ingredients. My personal bar was bigger than that before I even turned 21. In terms of just syrups and mixers that is fairly lacking, let alone liqueurs, and assorted call brands. Do I expect a 20-inch cubic unit to have Campari or every flavor of vodka? No, I suppose that's unreasonable. I could see high volume places supplementing their production with machines like this, using smartphones and tablets to put in drink orders and automatically billing guests, but they would never fully replace a stocked bar and competent bartender. 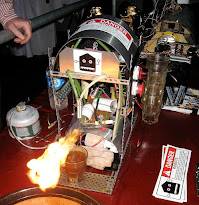 The last thing I'd like to share is a lovely article featuring commentary by Isaac from The Love Boat. This article showcases a futuristic cruise ship being made today that will have a fully robotic bartender. There are robotic arms that can shake tins and serve drinks rather than having them come out of a tap. The Makr Shakr, I will admit, is pretty cool. I do, of course, hate plastic cups, but I suppose I wouldn't trust a robot that looks like it came straight from building a Mustang with crystal stemware. It does certainly have the potential to eventually make some incredibly impressive cocktails. utilizing various call brands, and possibly eventually making its own syrups, shrubs, and rapid infusions. A bit of programming and a few gadgets added to check sugar contests and acid levels and the like and a machine like this could create drinks that human beings couldn't compete with.

That said, bartenders do a lot more than make drinks. We are hosts. We cater everything to our guests. I've made a gin and tonic fifty different ways for different guests in different moods. I like being greeted in a bar by a warm smile, a hearty handshake, and a general sense of welcoming friend on the other side of the bar top. I tell jokes and stories, do flair and magic, and provide guidance and consolations to those that need it. I have quelled arguments and provided remedies for the sick. While the Monsieur can tell when you come home late and offer a double, or a celebration drink when your sports team wins. I may sound cocky, but bartending and customer service is a lot more than that.

“Let us remember that the automatic machine is the precise economic equivalent of slave labor. Any labor which competes with slave labor must accept the economic consequences of slave labor.”
- Norbert Wiener
Photo Credit: Pikist, Wikimedia
Posted by bootslof at 9:31 PM