I have a number of students coming to me having no idea what whiskey is or knowing anything about the spirit. Whiskey is simply a grain-based spirit that has been distilled and aged. What make whiskey so special is the versatility of the simplicity. Most would categorize whiskey based on the region it comes from. This is a very good start, but you must keep in mind that each region has their own laws and standards of how their whiskey must be made in order to qualify for their moniker. The biggest whiskeys / whiskys are Scotch whisky, Bourbon whiskey, and Irish whiskey. There is also, Canadian whisky, Japanese whisky, Tennessee whiskey, and even French and Italian whisky. There are many subsets in each of the broad categories, but that'll be in my Whiskey 201 post(s).

Scotch Whisky has to naturally come from Scotland. Globally, it is the best selling style of whiskey or whisky despite its relatively small geography to work with. For the record, whiskey and whisky are the exact same thing, it's just that different nations and companies have chosen to spell it one way or another. Given the small region and strict laws, scotch is a very consistently excellent product. Scotch must be made with barley as the main grain in the mash. Scotch must also be aged at least 3 years in oak barrels. Finally, scotch must be at least 40% alcohol (80 proof) though it can technically go up to 94.8%.
Bourbon Whiskey has to be made in the United States of America. Contrary to popular belief it does not have to be made in Bourbon, Kentucky. The dominant mash of bourbon must be corn. corn is a sweeter grain compared to barley so many bourbons are often regarded as sweet whiskeys. A fairly unique thing about bourbon is that it can only be aged in fresh, unused, charred, oak barrels. Bourbon does not have a required duration for its age though any straight bourbon must be aged at least 2 years. Many modern scotch companies actually use old recycled bourbon barrels or sherry barrels. Bourbon again can't be sold at less than 40% but does have an upper limit of 63%. 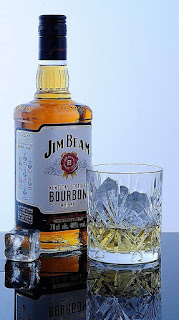 Tennessee is just a straight bourbon type whiskey made in Tennessee. Canadian whiskey has to come from Canada and has laxly the same regulation as the other big name whiskeys. Japanese, French, and Italian whiskeys naturally come from their respective countries. It is worth mentioning that there a number of other terms used in classifying whiskeys such as single malt vs blended whiskies, rye whiskey, and flavored whiskies.

“Love makes the world go round? Not at all. Whiskey makes it go round twice as fast.”