Absinthe drinkers are the dreamers of today and yesterday.


Absinthe was the drink of the impressionist period, as well as the follow-up movements of post-impressionism, surrealism, and modernism. Degas, Gauguin, Manet, and Picasso painted absinthe in their work. Vincent Van Gogh was a ferocious absinthe drinker. The author Hemingway said, "One cup of [absinthe] took the place… of all the things he had enjoyed and forgotten and that came back to him when he tasted that opaque, bitter, tongue-numbing, brain-warming, stomach-warming, idea-changing liquid alchemy.” Idea changing, brain warming, alchemy, I like that.

Absinthe has of course been embraced by the gothic culture. Absinthe was featured in Bram Stoker's Dracula and Interview with a Vampire. Moulin Rouge featured a literal embodiment of absinthe in the green fairy, which featured Ozzy Osbourne dubbing the laugh of the character. Marilyn Manson has developed his own brand of absinthe, Mansinthe, which he has used as a base for some of his oil paintings. 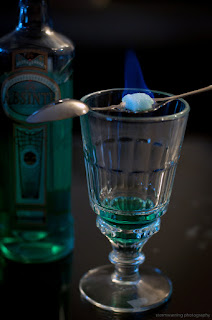 There is a ritual about absinthe. A fantasy and sense of wonder surround the drink. The myths of its hallucinogenic properties still remain. Absinthe hasn't even been legal in the United States for the last ten years. The hallucinogenic properties are, of course, grossly exaggerated. It's understandable how the lore continues though. First, it's fun to scare people with that fact. Second, you're not supposed to drink it straight. You have to dilute it and guess what, it changes color! It is a bizarre chemical reaction that a casual drinker wouldn't have seen before and probably wouldn't trust. The sense of taboo about absinthe has caught on with the outcast and eccentric crowd. Dream on, paint your dreams, live your dreams, don't be scared.

This is going to be a part of a series I'm doing about how different spirits appeal to different cultures and personalities. Check out my other posts on Whisky, Rum, Tequila, Gin, and other liquors and liqueurs. Much of what I'm posting has been opinion, much of it generalized and is not meant to be thought of as fact.
"After the first glass of absinthe you see things as you wish they were. After the second you see them as they are not. Finally, you see things as they really are, and that is the most horrible thing in the world."