There is a large variety of orange flavored liqueurs available for a number of different applications. Triple Sec, Blue Curacao, Cointreau, Grand Marnier, X-rated, and Solerno all have an orange flavor. Each one of them is a bit different, of course.

The direct counterpart to Cointreau is Grand Marnier. The two products have almost exactly the same price point depending on your region. Where I live, they both cost $35 a bottle. Grand Marnier is quite distinct in that it is an orange liqueur that is blended with cognac. This changes it to having a brown color and creates a fairly unique blend of flavor that some people will drink straight. 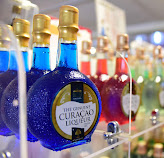 Curacao is another style of orange liqueur. Curacao takes its name from the island of Curacao off the coast of Venezuela. The oranges used in curacao tend to be those from the island, but there is no such legal requirement. The fun thing about curacao is the color palette available. Americans have blue curacao everywhere. There is also green, red, and orange curacao. This is literally just food coloring and dye added to the liqueur. We like the blue color because bartenders are creative people and people love pretty drinks. We already had other liqueurs in all the other colors, so when a blue liqueur came to be available it caught on like wildfire.
There are a few other orange liqueurs worth mentioning quickly. Solerno is a premium liqueur made from the blood orange. Campari is a bitter liqueur that uses just the peels of oranges as one of it's many flavors. Campari should not be used as a substitute for any other orange liqueur. X-rated is a liqueur made with french vodka, blood oranges, and passion fruits. Many other recent liqueurs use orange and other fruits as well, like Gran Gala and Patron Citronage.