Bars and pubs were originally almost a sort of town hall. There are many tales of the founding fathers of America planning the revolution and writing the documents we read about in grade school. Bars for most people these days are a means of cutting loose, possibly venting your problems, and having a laugh.
If you work in this industry long enough in front of the house you hear a lot of interesting conversations. I've seen first dates crash and burn. I've heard lawyers give counsel to clients. I've heard businessmen negotiate deals and a couple politicians talking shop. There have been many rousing debates ranging from "Who was the star of that movie?" to far more serious matters. There was one conversation I partook in the other day that I believe takes the cake in terms of the greatest bar conversation.
What is the best food to eat while receiving oral sex?

I can't exactly remember how this conversation wound up to its final point of debate. I know it started with the idea of the greatest sensation a person can experience, or more sensations experienced simultaneously.

There is a great comedian by the name of Dylan Moran who I've referenced a few times in my blog. He was on stage one night said, "I know you people really want. I know what everybody wants. You're thinking 'I want to be laying down on a cushion, with my mouth full of chocolate, and something lovely happening to my lower half.' that's all you want."
A more commonplace idea I hear discussed is the idea of a "Shower Beer". This is a fabulous thing which I've partaken in many times. The hot with the cold, the relaxation, it's grand. But then the idea of "Shower Beer and a Blowjob" came around. A truly epic idea, which I may or may not have experienced. This was the case at the particular bar I was in one fortunate evening. The bartender said that she was partial to cheese fries and cunnilingus, perhaps the most modern American sentence of all time.
The debate raged with a few common agreements being made. Nothing using utensils where you had to cut the food up, or anything being excessively spicy need be considered. Various styles of pizza were a favorite. The joke of 69ing was of course made. But the idea really does sort of circle around the ego boost of the activities. You're feeling like king or queen of the world, like the great caesar being fed grapes by a concubine. Sushi was popular for a few people. 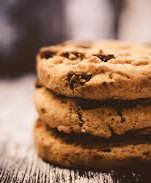 A few people went the desert route with ice cream sandwiches or chocolate-covered strawberries. Someone just said a milkshake. One particularly interesting person said fondue. With cheese, we circled back around to savory. Peanut butter and jelly, lobster Mac'n'cheese bacon-wrapped shrimp, ribs, wings. I personally think wings would be too much of a distraction. Gummi bears were well received. But a favorite was fresh-baked chocolate chip cookies.