Cannabis smoothies are becoming a bit popular in the states these days. People are adding weed to their breakfasts and just about anything else. Weed has been around for ages and is a part of more than one religion it turns out. Aside from the Rastafarians, the Hindu religion has a lot of affiliation with cannabis. Many of their gods smoke, which may explain some of their stories. During the Diwali holiday, which is a sort of Hindu New Years, they drink a milk based smoothie with cannabis leaves. Be aware, this is not a single serving, This should serve about 20 people. 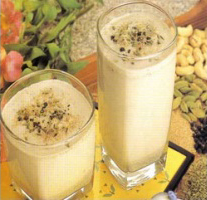 You will also need some cheesecloth, a mortar and pestle, and your usual kitchenware like bowls, funnels, strainers, and a bottle to serve.

To prepare you will need to soak the almonds overnight. Then remove the skins. Muddle the skinned almonds into a paste.

Start by removing any stems from the buds of cannabis. Discard these. If you are using dried buds, like most people do, you will need to hydrate the buds a bit. Boil a cup of water and add the weed and heat till it soaks up the water. Heat a 1/2 cup whole milk and heavy cream mixture (you could use half and half). Add the cannabis, milk mixture, and almond paste to a mortar and muddle until it becomes one consistent paste in the milk. More muddling doesn't really hurt, it just allows more time to infuse. You may need to do this in stages depending on the size of your mortar. The almonds and the fats in the milk with start to pull out the oil in the plant. Heat 2 cups whole milk mixed with 1/4 cup cream in a pot. 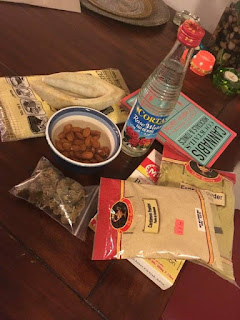 There are a few ways to go from here. You can steep this entire paste in the warm milk and let the flavors all mellow out, which does add some grassy flavor, or you can sort of wash the paste in cheesecloth with the warm milk which is much more labor intensive to get the cannabis effects but does greatly reduce the grassy taste. I personally don't mind a little grassiness so I'll just go with the method we used for this last batch.

Add the weed milk almond paste concentrate to the milk mixture over heat. add the spices and rose water and stir constantly for 30 minutes. Do not let it boil or allow scum to form on the surface. Set up a rig of three layers of cheesecloth over a mesh strainer over a funnel over a sealable bottle. Pour the mixture through the cloth slowly, allowing it to filter into the bottle. Allow this to cool and then squeeze the cloth to extract as much of the fluid as you can. you may want to repeat this filtering process. Chill the bhang. Shake before serving.

Take note this is exceptionally potent and it takes a while to kick in. Start with no more than a shot glass worth and wait an hour to 90 minutes before taking anymore to gauge the effects. This is a fat based edible so it takes longer for the body to process than smoking.

"We didn't have rehab in the 70's. Back in the 70's, rehab meant you stopped doing coke, but you kept smoking pot and drinking for a couple more weeks."
- Denis Leary
Posted by bootslof at 2:06 PM