This was a cocktail I made for the Old Forester Old Fashioned competition. The only rule was that it had to use at least an ounce of an Old Forester product and it had to resemble an old fashioned. I actually had been experimenting with different bitters around this time and came up with a fun, earthy, fall old fashioned. 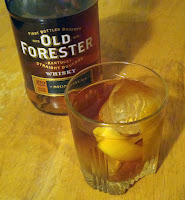 
Add all the ingredients to a mixing glass. Add ice and stir. Strain into a rocks glass with fresh ice, ideally one big cube. Garnish with an expressed orange twist. 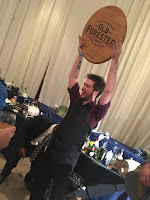 I had recently had a seminar with one of the owners of Amor y Amargo and we tried some lovely products. I decided to procure a bit of the Barkeep Apple Bitters. I thought it matched with some of the apple notes of the bourbon and the citrus from the Averna played well. For sweetener, the maple syrup worked with the earthiness.


I actually won judges' choice for this cocktail, the grand prize of the competition, though there was a people's choice round too. This was the first competition I've won without participating as part of a group. I did have a darling friend barbacking for me, helping me out. It was a great honor. I got to see some great friends and meet some new people. And I left with a fantastic prize.