Today I'm going to be starting a series of posts tasting a line of products put out by a brand or corporation and bundled together to create something of a variety pack for passionate drinkers. I'll be trying beers, whiskeys, bitters, and everything in between. Today, it's the Unibroue Sommelier Collection. 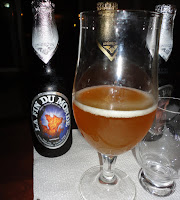 La Fin du Monde
9.0% ABV, Triple style golden ale
This beer I admit to having before, many times. It was one of my earliest introductions to what I would call craft beer. When I started drinking this I saw it as very high proof compared to the normal domestic beer I was used to. This is the kind of beer that goes to your head. It has a wonderful spice to it, some dry clove. The yeast flavor is very prominent. There typically is a little sediment in the bottle but don't let that discourage you. It's the end of the world. I give this beer a 10/10. You really must try this beer. 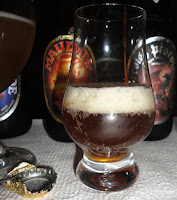 Maudite
8.0% ABV, Strong Amber-Red Ale
After I poured this into the glass for the first time I noticed how long the head lasted. I really wouldn't go away. It's thick and malty. It's not an overly carbonated, but that foam is just stubborn. This is a nice amber. Again, there is a bit of sediment and cloudiness to this beer. The finish is nice and crisp. Inspite of the strong malty flavor you do get a little orange citrus complimenting the other spices. Despite the crispness, I don't love this beer quite as much. I give it a 7/10. Mainly because I can't think of an occasion or meal to enjoy it with. Though it is quite good. 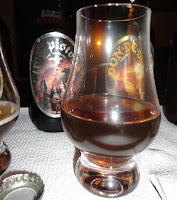 Trois Pistoles
9.0% ABV, Abbey Syle Strong Dark Ale
This was my first time trying this beer. The head is creamy, brownish beige, and rich. It starts fairly sweet on the tongue and finishes with a nice spiced rum finish. You pick up flavors of chocolate and spice in addition to the rum. The ABV is certainly still up there, but the creamier nature of this beer makes it a little harder to notice than in La Fin du Monde. There's a great malt flavor here. I give this an 8/10. 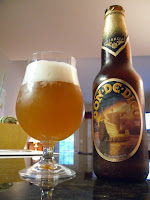 Don de Dieu
9.0% ABV, Triple Wheat Ale
When I think of a wheat beer I usually think of a massive glass with a lot of citrus. This is not a citrus heavy beer, and a 22 oz. wheat beer glass of that may be dangerous. Again at 9.0% ABV this certainly will bite you, especially after a tasting of the last few beers. The yeast flavor is certainly less in this than the La Fin du Monde and Maudite. There is next to no spice flavor by comparison. there are sweeter notes of honey with some vanilla and some floral and fruity components. It's described as having hints of an unfiltered sake and you can actually really see that. 7/10. 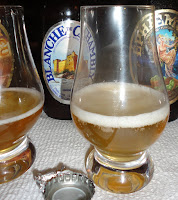 Blanche de Chambly
5.0% ABV, Belgian Witbier
As far as this tasting went, this was the beer I kept going back to in order to cleanse my palette. This is much more typical of a traditional wheat beer. It has the typical citrus feel, with some added coriander flavor. The head is light and the carbonation is akin to a champagne. It's a nice beer but feels very out of place compared to the rest of the line of products offered here. I'm actually only to give this a 5/10. It's a fine beer, but very average and with the price point you have better options.

Ephemere Apple
5.5% ABV, White Ale Brewed with Apple Must
This really does remind me of a cider, but it's less sweet, harsher. It's made with granny smith style apples, but it is still a beer. Make no mistake about that. If a customer comes in and would like a cider, they will not be happy with this. I'm going to give this a 6/10. It's a nice drink, a decent ale, very akin to a belgian white. Unibroue has done some amazing things but this isn't amazing. Perhaps it's just not a concept I care for as I haven't had many apple beers. I doubt I'd seek this out again though.

“Isn’t beer the holy libation of sincerity? The potion that dispels all hypocrisy, any charade of fine manners? The drink that does nothing worse than incite its fans to urinate in all innocence, to gain weight in all frankness?”
- Milan Kundera
Posted by bootslof at 8:30 PM