This was a cocktail I was playing with during the Pope's visit to Philadelphia. Every week at my restaurant we feature a different city in Italy. We do regional dishes and wines and even a cocktail designed to pair well with the menu or that uses some regional ingredients or flavors. I was told that for our week in the Roman ghetto I would need to use a cocktail with Cynar. Why Cynar, I'm not entirely sure, but it's good to have a guide. Here's what I came up with. 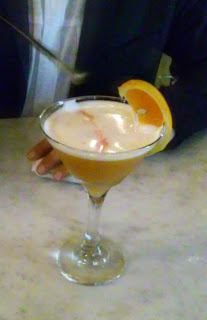 Add all the ingredients except the bitters to a mixing tin without ice. Dry shake until the ingredients are well emulsified. Open the shaker, add ice, and shake until well chilled. Strain into a chilled cocktail glass. Garnish with an orange wedge and a dash of Peychauds.

Now, I don't personally like Cynar, but I find that amaro-style liqueurs work very well with tea. Perhaps it's the natural digestif qualities of both. I decided to continue this with brandy, a typical after dinner drink. I know lemon is more traditional with teas and toddies, but I was drinking during brunch time and found that the orange was more mellow and better maintained the balance of the drink. I called this drink the Pope's Hangover because everyone was beaten down by the Holy Pontiff coming to town. There was a crazy rush of tourists, but not enough money to keep people jazzed up. This drink was for that morning after.

"Men are like wine - some turn to vinegar, but the best improve with age."
- Pope John XXIII
Posted by bootslof at 6:48 PM