Tequila 401: Evolution of a Cocktail: The Margarita

The actual origins of the margarita are very open to discussion. It's been claimed by countless bars and bartenders as their own creation. Some stories seem to be more factual or fanciful than others. I'm going off what I believe. I told my favorite story in my Tequila 301 post, in this one I'll go into a few more other plausible stories.
The Daisy
2oz. Liquor, 1 Lemon juice, 3/4 Sweetener, 1 Club Soda, 1/2 Cordial
Add all the liquid ingredients to a mixing tin with ice, aside from the club soda. Shake and strain into a rocks glass with cracked ice. Garnish with an orange slice and a cherry.
This is a very old style of drink with very little consistency in terms of the recipe. The drink style, daisy, is very similar to that of a sour, collins, or fizz. Any liquor can be used, brandy and gin being the two most popular. Grenadine is certainly one of the most common sweeteners used, but some recipes may call for simple syrup, gum syrup, or even an orange liqueur of some type. Some recipes omit the club soda or substitute chartreuse for the cordial. as a base, try 2 oz brandy, 1 oz. lemon juice, 3/4 grenadine, with club soda and orange curacao. 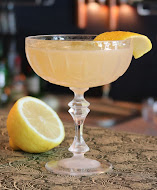 The Sidecar
2 oz. Brandy, 3/4 oz Cointreau, 3/4 oz. Lemon juice, sugar rim
Add all the liquid ingredients to a mixing tin with ice. shake and strain into a chilled cocktail glass with a sugar rim. Garnish with an orange slice and a cherry.
This is the drink that would seem to be the most natural precursor to the margarita. While the margarita is in its core components a sour, it had to take a few steps to get there. These days the margarita is the reigning sour, a cocktail comprised of a liquor a sweetening agent and a souring agent. The sweetening agent in a margarita is typically the orange liquor, unlike the usual simple syrup. The earliest record of this drink is from 1922 as equal parts cognac, Cointreau, and lemon juice. It's a simple variation on the brandy daisy. This drink predates the margarita by at least a decade, possibly two. The margarita was just two baby steps away from this cocktail. 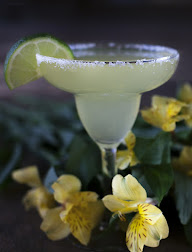 The Margarita
2 oz. Silver Tequila, 1 oz. Cointreau, ¾ oz. Lime Juice
In a mixing glass add all the ingredients with ice. Shake and strain into a salt-rimmed margarita glass with ice. Garnish with a lime wheel.
Here we have the legend, the drink that is possibly the best selling drink in America. Margarita actually means little daisy, though it is quite different from many of the original recipes in its use of lime juice over lemon. A daisy was a very common cocktail style in it's day and one can see how it influences a great many modern cocktails. The margarita is a great sour style cocktail and can easily be modified with other fresh fruit flavors. It remains a blank canvas to play with while still being absolutely charming on its own. Many people will actually take this drink up, without ice. There are no rules,
The Frozen Margarita
2oz Tequila, 1/2oz Triple Sec, 1oz Lime, 1/2oz Simple Syrup, 8oz Ice
Add all the ingredients to a blender with ice. blend until a uniform consistency, usually about 12 seconds
This is, unfortunately, one of the many times I'll have to add a cocktail variant after the original that may actually be the version the average person is more familiar with. The recipe I gave is a great way of making fresh-tasting cocktails. With blended drinks, however, some people actually prefer drinks with concentrated lime juice or sour mix. Flavored mixes are so abundant that strawberry and mango flavored margaritas are just so easily replicable that everyone is doing it. This really is a good drink to sip on the vacation.

No matter how you enjoy your margarita, it's always nice to know a little bit of history behind it. The margarita is a canvas in its own right, but it does have its roots in other earlier cocktails. I'll never tell you what you should or should not like, but make sure you try the classics every once in a while.

- Tequila is like duct tape, it fixes damn near everything.
Posted by bootslof at 12:01 AM