This is part of my series I'll be doing on different glassware and their functionality. Not only do different glasses naturally have their unique visual appeal but it's important that people know why these glasses have their shape so when people start creating their own drinks and cocktails they know the best vessel to keep the integrity of the drink intact or at least can understand how the drink might change due to the nature of the glass. 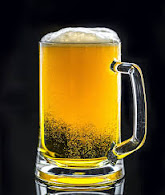 Mug 6-35oz.
Steins, tankards, and mugs are the staple of all-day beer drinking. In German beer gardens and beer halls, a handled mug is a tradition. They hold a large amount of liquid and are great for walking around with. Beer vessels are traditionally made of glass, many mugs are ceramic. Stein translated roughly means stone. Traditional German steins are often made from pewter, porcelain, or even silver. Steins feature a pewter lid to keep insects out with a thumb handle for one-handed opening and drinking. Adding a handle or stem to a glass also allows the drink to remain colder as your body heat is not in as direct contact with the liquid. Most mugs and steins are adorned with decorations such as family crests and humorous slogans or images. Mugs are typically used with lighter beers like golden colored Oktoberfest beers.

Stange 6.5-10oz.
The stange or stangen glass is what some people call the purest beer glass. They are tall straight cylinders. This means that they more or less have the least influence on a beer's state. There are no engravings or curves to affect the smell or taste. They are used to bring out the flavors of the most delicate beers. It's said to amplify the malt and hops flavors. Many people will simply substitute this for a collins glass.

Pint Glass 16oz.
The conical pint glass is probably the most common type of glass found behind a bar, except for maybe wine glasses in some bars. These glasses are simple and multipurpose. These are also the type of glasses that fit best in a Boston shaker. They are often called mixing glasses. For this reason, the dimensions are very standardized. There's really nothing special about these glasses that best match any particular style of beer, but they certainly aren't the worst option for any style. Typically heavier beers don't receive the 16oz. portion size though.

English Pub Glass (Nonic) 20oz.
These glasses are naturally a bit more popular in European-style bars and with European style beers. These glasses have slightly thinner glass than mixing glasses. They also feature a slight bulge an inch or two below the rim. This minor bulge does not affect the beer in any real discernible way. The main function is to make the glasses easily stackable even when slightly wet. Mixing glasses tend to suction and stick to each other when stacked. The bulge also helps the drinker grip the glass. Supposedly it also reduced the chances of the glass chipping around the rim. Again these glasses can be used for pretty much any style of beer.

Wheat Beer Glass (Weizen) 16-23oz.
Wheat beers tend to produce a lot of head, even when poured professionally. These glasses were designed to help with heady beer. Bubbles always start at the bottom of a glass. Head of course forms at the top of the glass. By creating a smaller bottom and wider mouth, it limits the height of the head. The rim bows inward to help trap the head making it nice and dense. The small base is necessary for bars so you don't have to keep stopping and starting your pour waiting for the head to settle. It also means that the beer will stay carbonated longer.

Pilsner Glass 10-23oz.
Weizen glasses and Pilsner glasses are often confused due to their very similar style and size. Pilsner glasses are often a bit more straight-edged in shape rather than curved. They also don't bow inward at the rim. This is to let the aroma out. Wheat beers tend to already have a potent smell. Pilsners are a bit more subtle and the outward flare helps the nose. Many smaller pilsner glasses have a foot to them, rather than a wider bottom. This is to again reduce the amount of head but maintain the balance of the glass.

Porter / Stout Glass / Goblet / Chalice 12-15oz.
These are typically smaller sizes than the traditional 16oz pour. This is because they tend to feature darker colored beer, which is often higher in proof and flavor. The elevated bowl creates a lovely visual presentation for observing the rich colors. They bow inward to create that dense creamy head. Many home drinkers will opt to use a brandy snifter in place of a dedicated goblet.

Tulip / Thistle Glass 13-18oz.
These are sort of the reverse of the Weizen glasses. Thistle glasses pinch in a bit lower on the glass. They resemble Scotland's national flower and are thus used for scotch type ales. The pinch helps concentrate the aroma and the flared rim allows for a concentrated head. The stem also helps to keep the beer colder. They are very good all-purpose glasses for almost any craft beer. Tulip glasses are used predominantly for Belgian style beers.
Ein Zwei Drei Vier. Lift your stein and drink your beer.
Photo Credit: Pikist, pikrepo, pxfuel, Wikimedia, needpix
Posted by bootslof at 5:43 PM