This is my first installment in a series I'll be doing on different glassware and their functionality. Not only do different glasses naturally have their unique visual appeal but it's important that people know why these glasses have their shape so when people start creating their own drinks and cocktails they know the best vessel to keep the integrity of the drink intact or at least can understand how the drink might change due to the nature of the glass.

White wine glasses are the staple that you will find in most restaurants and homes. These are the icons. They are the most common, arguably the most versatile, and best known. These glasses have a slight bowl shape but are generally more straight than a red wine glass. White wine glasses are generally more about the visual appeal of the wine rather than, say, aroma. The slightly straighter walls also seem to help with the wine's "legs" or "tears". When a wine is swirled around a glass some of it clings to the walls of the glass even after the majority of the liquid has settled. The liquid bunches up like beads of sweat and drips down. With practice, by observing these lines you can get an impression of the alcohol and sugar content of the wine before it even touches your lips.

A red wine glass has a wider body more for the way that it is exposed to the air. The large bowl shape resembles that of a brandy snifter. This allows the wine to breathe or oxidize. You've probably seen wine decanters with an incredibly wide base. The air actually changes the flavor of the wine. If you've ever done a wine tasting or dealt with a wine enthusiast you've probably tasted a glass or wine and then been made to wait a half hour while it breathes and note the differences. Another note about the shape of red wine glasses is the sharp beveling in at the rim of the glass. This is to trap the aroma. an open or flared lip would allow all the aroma to escape out, which can be helpful with stronger alcohols. the inward bowl makes it much easier to smell the wine. White wine being chilled places much less emphasis on aroma.
The champagne coupe has a very long history and these days the style of glass is used for a number of cocktails, often in place of a martini glass. There's a very humorous story of the original shape of the coupe being modeled after Marie Antoinette's breast. This was disproved by some researcher with a bit too much time who estimated that Marie was a large C cup, and a coupe is not a large C. Some said it was Madame de Pompadour. The glass most likely originated in the mid 17th century a century before these women were born, though they were avid champagne drinkers. Aristocracy and royalty were obsessed with champagne; it's fabulous for parties. The glass is ideal for stacking so one can make a champagne tower.
The champagne flute is very traditional for when you are sipping champagne. The wider bodied coupe was sort of designed to cause the champagne to go flat. Bubbles form on the bottom of a glass. The wider the glass the more bubbles are released. Champagne in a coupe will go flat faster than it would in a flute. Coupes were partly popular at parties because they reduced the amount of belching from the carbonation. These days flutes have really become the norm due to the most consistent nature of the drink as you drink it and the beautiful visual effect of bubbles rising through the tall glass. 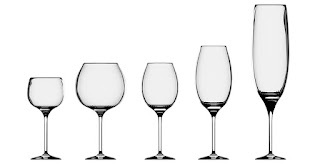 Stemless wine glasses have been on the rise over the last few years. Stems are ideal for keeping wine at the desired temperature. Aside from most red wines, Wine is served chilled and should stay chilled as long as possible. If you're wrapping your warm, meaty hands around the bowl of the glass it's going to heat up a lot more than if you hold it by the stem. It really is a fashion choice, however. The correct way to drink is in whatever way makes you happiest.

"Whenever I get a bottle of wine, I open it up and let it breathe. If it's not breathing I give it mouth to mouth."
Photo Credit: Pxfuel
Posted by bootslof at 11:29 PM