Brandies and cognacs are probably the least used liquors for cocktails. I, personally, find that very sad. Brandy is such a fun thing to play with. It has so many layers and complexities that can make cocktails feel a bit muddy, but a light hand can create a great balance and really let brandy shine among the other ingredients. 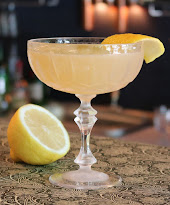 Add all the ingredients to a mixing tin with ice. Shake until well chilled. Strain into a chilled martini glass with a sugar rim. Garnish with a lemon twist or an orange slice.
The sidecar is a very classic cocktail. It is effectively a brandy sour with Cointreau instead of a raw sugar element. It has quite a history. The exact history is a bit hazy but it seems to have come about toward the end of World War I and began appearing in books in the early '20s. The invention of this drink is credited to an American Army captain. This drink did come from France, just look at the ingredients, supposedly at the Ritz Hotel in Paris. Supposedly the captain would go to the bar and order this cocktail. He'd get a bit drunk and one of his privates would have to shuttle him home in the sidecar of a motorcycle. The drink eventually took its name from this mode of transport.

Add all the ingredients to a mixing tin with ice. Shake until well chilled. Strain into a chilled martini glass. Garnish with some freshly grated nutmeg.
The original Alexander cocktail supposedly uses gin instead of brandy. Brandy just brings so much more to the drink in my opinion. Brandy is an after-dinner drink; it's a dessert. It blends with other desserts with ease. Gin just doesn't work as well. This drink dates way back to 1915 or earlier. You probably know the cream drinks made popular in the '60s. Grasshoppers, creamsicles, pink squirrels, and the like share many similarities with the alexander. The Alexander tends to have a bit more alcohol and is a bit more serious a drink.

Start by warming an Irish coffee mug with boiling hot water. Once warm, remove the water and add the Brandy and Bärenjäger. Add the nutmeg and fill with more boiling water.  Stir lightly. Garnish with a cinnamon stick and a lemon wedge.
The original Hot Toddy would be made with whiskey, rum, or brandy. They would add hot water, honey, and a few baking spices. It's gone through countless iterations, but the combination of apple and honey with some baking spice is used across the board in baking. This drink can be made with calvados instead of American apple brandy. It's like an apple pie in smooth liquid form. Some people will actually throw a tea bag into the hot water do add a bit more flavor to the drink.
Pisco Sour
2oz. Pisco, 1oz. Lime juice, 1oz. Simple Syrup, Egg,
Crack an egg and separate the white into the drink. Add all the ingredients to a mixing tin without ice. Dry shake until well emulsified. Open the tin, add ice, and shake again. Strain into a chilled cocktail glass. To garnish, drop 3 droplets of Angostura bitters across the foam of the drink.
Traditionally this drink uses Peruvian Pisco. It was invented in Lima, Peru in the early 20's by an American, just after the sidecar was gaining popularity in Europe. It went through some iterations, figuring out the best citrus and eventually adding the egg and bitters. This has led to some debate as to the real origin of the cocktail. Some experts are convinced it came about in 1915 while others will say up to nearly a decade later. This has become something of a national drink. On the first Saturday of February, Peruvians do have a national holiday celebrating the cocktail. Give it a try, the new flavors and textures have opened many people to a new level of drinking.

“Art is wine and experience is the brandy we distill from it”
-Robertson Davies
Photo Credit: wikimedia
Posted by bootslof at 3:09 PM