I recently started tending bar at a new location, a fairly casual restaurant. I was in training so they put me on the service bar. A ticket came in for a Manhattan and we were a bit slow so I naturally took the time to pull out my bar spoon and give it a proper stir. My other, senior,  bartender said, "I can't remember the last time I did that." This sparked a rousing conversation as to, WHY THE HELL NOT? He was used to busier shifts and had grown used to taking the shortcut of simply swirling such drinks. Now I've worked in such bars where these shortcuts are commonplace, but when I have time I've always done things with as much care as possible. I see this more and more these days, I believe it's a phenomenon primarily experienced in America. The fast-paced, fast food lifestyle has lent itself to drink.

Many bartenders can probably cite Sweet and Sour mix to be the symbol of this phenomenon. Sour mix started as a shortcut some bars would use to save time when batching cocktails in high volume. simply juicing lemons and limes in bulk at the beginning of a shift with some sugar worked as an all-purpose ingredient for countless drinks. Shortly after, store brand sour mix emerged, possibly to make bartending more accessible to the home hobbyist. What's fact is that it started getting used in bars. A blend of artificial sweeteners and dyes and chemical concentrates actually replaced what's fresh that we had right in front of us. It's cheap, doesn't spoil, saves time, and takes less training.

Now the nightlife thing has caught on in such a big way people have forgotten what things actually taste like. We've become so used to the speedy sugary convenience that we forgot what something of craft tastes like. While bars have always been a home to social interaction, they were also where a bartender was respected. These days people would be fine getting a drink from a robotic gun shooting it into a glass. I doubt anyone a century ago ever imagined someone would order a can of macro beer in a restaurant. The original Irish pub was meant to be a second home. You were to feel as though you were a guest in someone's living room. Perhaps we've come full circle to that and actually started drinking the same swill we get at home for five times the cost just to feel social. 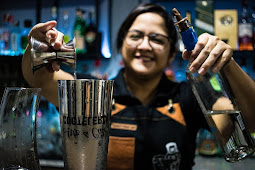 I will yield I got my start in bars and even a bartending school that stressed speed rather than knowledge and technique. I learned that speed comes with practice. Practice the sloppy and rudimentary and you'll quickly become a decent bartender at a sloppy boring bar. Practice style and grace, learn the meaning behind the technique, and soon enough you'll be a great bartender in any bar.

I would apologize for being preachy, but I never met a preacher who apologized for it.

"Associate with men of good quality if you esteem your own reputation; for it is better to be alone than in bad company."
- George Washington
Photo credit: pikist
Posted by bootslof at 10:53 PM