Tequila is an amazing spirit to play with. There are sweet types, barrel-aged types, types that are infused with other flavors. It can be a little daunting but go out there and have fun with your spirits. Just remember, if a brand works great in one cocktail, it doesn't mean it's the best. It also doesn't mean it's great in every cocktail. Experiment, that's what life's all about, especially when you're drinking tequila. 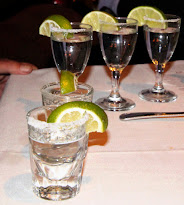 Shot
Salt, 1 1/4oz Tequila, Lime wedge
Pour yourself a shot of tequila. Wet the back of your hand and shake some salt on it.
Lick the salt, take the shot, and bite the lime. Enter any home in Mexico as a guest and you will probably be greeted with a shot of mezcal or tequila. This is a healthy thing to partake in and you should really know what tequila can taste like straight. This may not be the social style of shot seen in Mexico, but it's a common Americanized form that does have proper roots. Tequila used to be medicine; it would be prescribed by doctors. Some drinkers found the spirit straight a bit harsh. The salt opens up the palette and the lime helps cleanse it. Plenty of variations exist using sugar, lemon, or orange. 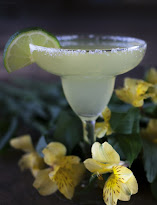 In a mixing glass add all the ingredients with ice. Shake and strain into a salt-rimmed margarita glass with ice. Garnish with a lime wheel.
The first Margarita was arguably made by Carlos "Danny" Herrara in 1938, but that's not my favorite story. My favorite story is more about how the Margarita became popular. There was a bartender by the name of John Durlesser who competed in and won the 1949 All American Cocktail Contest with a drink called the Margarita. He did not explain the name of this drink. The drink became wildly popular across the globe. Over twenty years after the competition he revealed the true story about why he named the drink Margarita. 23 years before the competition he had gone hunting with his girlfriend. She was shot by a stray bullet and died before she could get medical care. In my opinion, the most amazing thing is that the drink gained so much popularity without the story being out.
Tequila Sunrise
2oz tequila, 4oz orange juice, 1/2oz fresh grenadine

In a highball glass with ice, add the tequila and the orange juice. Slowly dribble the grenadine around the inner rim of the glass. The denser grenadine will sink. Garnish with an orange and cherry.
The original tequila sunrise was actually made with tequila, creme de cassis, lime juice, and soda water. This was back in the '30s at the Arizona Biltmore Hotel. From the '70s to the present day the common recipe is what you see here.
Paloma
2oz Blanco tequila, 3oz grapefruit juice, 1/2oz lime juice,  Club soda

Rim half a highball glass with salt and fill with ice. In a mixing glass with ice, add all the ingredients except the club soda. Stir all the ingredients together and strain into the highball glass. Top with about an ounce of club soda. Garnish with a lime wheel.
Paloma, meaning dove, is another fairly simple highball cocktail. In Mexico, these drinks are even more popular than the Margarita. Ideally one would use grapefruit soda (Squirt), which you can find in the right stores. Commonly in America, one would use white grapefruit juice in this with club soda to get a similar result.

“I’ve created a new drink! I'm calling it the Piñata Colada! It’s sweet and tasty, but when you wake up the next morning your head feels like it’s been hit with a stick.”
- José N. Harris
Photo Credit: Wikimedia, pixabay
Posted by bootslof at 2:38 PM