Vodka, it pays the bills. Bartenders pour it chilled as shots or martinis. We'll serve it warm with rye or pumpernickel bread to sniff and pickles to eat. Some of you may have seen this, either in House of Cards or another medium. Russians would drink vodka in a way even more bizarre than how people would drink tequila. Give it a try sometime; you get a bit loopy. Eat some oily food, clink your glasses, empty your lungs, do the shot as you breathe in, smell the rye or your armpit, eat your pickle, laugh loudly, wait five minutes and repeat. Na Zdorovie! 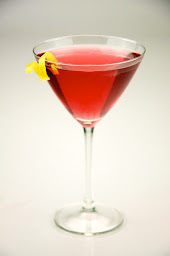 Add the ingredients to a cocktail shaker with ice and shake until well chilled. Strain into a chilled cocktail glass and garnish with an orange twist or lime slice.
While I'm not personally a fan of Sex and the City, there's no denying the popularity of this drink. It seems to have come about in the '70s in the gay neighborhoods of Provincetown Massachusetts. At the time, it was not exactly the symbol of class and elegance it is today. Don't get me wrong, Provincetown is beautiful and the people are very friendly. But gay bars in the '70s were not exactly brimming with fresh juices and premium spirits. It was arguably Dale Degroff who revitalized the cocktail at the Rainbow Room in New York City. Madonna was photographed with the cocktail and it's been a staple cocktail in a bartender's repertoire. Sex in the City certainly also boosted the popularity of this drink among the national population.

Vesper
3 oz. Gin, 1 oz. Vodka, 1/2 oz Lillet Blanc
Add the ingredients to a cocktail shaker with ice. Shake it until it's ice cold. Strain into a champagne coupe. Garnish with a large slice of lemon peel. Got it?
As many of you probably know this is the drink that James Bond ordered in Casino Royale. It is certainly a bit dominant on the gin side, but it is a classic spin on the martini. There's a lot of speculation as to why the drink was ordered this way. "Just a moment. Three measures of Gordon's, one of vodka, half a measure of Kina Lillet. Shake it very well until it's ice-cold, then add a large thin slice of lemon peel. Got it?" James bond is a man who knows what he wants. He said he only drinks one drink before dinner, but he likes it large, strong, cold, and well made. Sean Connery adapted this to be a vodka martini shaken not stirred. 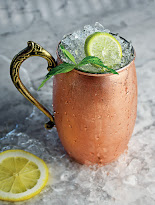 Add the ingredients to a copper mug with ice. Garnish with a lime wedge.
This drink was created in 1941 in Los Angeles by a partnership between a ginger beer producer, Cock 'n' Bull, and a liquor distributor trying to popularize vodka in America as it had just been introduced to the United States after World War 2. In the fifties, there was a massive vodka craze. Prohibition ended not twenty years before and world war 2 less than a decade. People liked the easily mixable liquor and started mixing it with virtually everything. Smirnoff claims to be the original vodka for a Moscow Mule. They actually host a competition as to who can redesign the Moscow Mule every year.

Add the vodka and Kahlua to a rocks glass with ice. Gently float some cream on top and stir lightly with a sip stick.
The Dude abides. This drink came about in the '60s as a simple variation to the Black Russian. a white Russian is just a black Russian with the addition of cream. The drink really has nothing to do with Russia aside from the fact that the dominant ingredient is vodka. In the classic 1998 cult comedy film The Big Lebowski, the lead character, The Dude as played by Jeff Bridges, drinks White Russians. The fan base of the film is truly devoted so much so that they have even created a religion, Dudism, with 200,000 ordained Dudist priests. Given the devotion of the fan base, it's natural that The Dude's signature drink be given a rise in popularity.

"If you want to be happy, be."
Leo Tolstoy
Photo Credit: Wikimedia, pixabay