The story or legend of the origin of amaretto is a personal favorite of mine. In 1525, a young pupil of Leonardo da Vinci, Bernardino Luini was commissioned by the church to paint some frescoes in Saronno, Italy. For a fresco of the Madonna, he required a model. He found love with this model, a poor widowed innkeeper. The woman found love for Bernardino as well. As a gift to her lover, she decided to make a liqueur. She steeped apricots with brandy and the resultant spirit was dubbed amaretto. There are several variations I have heard about this story including that the innkeeper was still married and that the two were having an affair. Another variation I heard was that the gift of amaretto was given on valentines day. 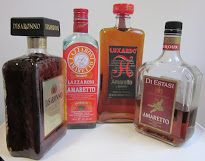 It stings a bit to say this, but amaretto in my personal experience has always been a sort of playful flirty spirit. When I started drinking I drank Disaronno Originale on the rocks. That was my drink until I matured into a godfather, easing me into scotch. I wasn't the norm for amaretto drinkers in my age group. People drank amaretto sours left and right around me, with store bought sour mix, of course. Young college girls and some guys as well just drank them down like water. Amaretto has a respectable proof, usually about 25%. I've heard several craft mixologists who have chosen not to carry any amaretto in their bar. These people are too stingy and analytic. Happy people, loving, sexy people drink amaretto. A wonderful sweetness comes to the body. Love yourself, love your friends, love your drink.

This is going to be a part of a series I'm doing about how different spirits appeal to different cultures and personalities. Check out my other posts on Whisky, Rum, Tequila, Gin, and other liquors and liqueurs. Much of what I'm posting has been opinion, much of it generalized and is not meant to be thought of as fact.

"Twas a woman who drove me to drink. I never had the courtesy to thank her."
W. C. Fields
Photo Credit: Wikimedia
Posted by bootslof at 9:33 PM